During the fifteenth century instrument makers began producing choirs (or consorts) of recorders and other instruments in various sizes, presumably with cylindrical bores.

As the sixteenth century progressed, consort recorders were constructed with  conical bores tapering gently towards the foot. 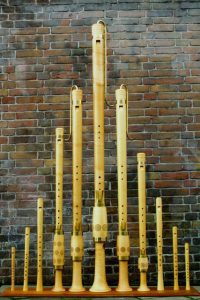 Extended Renaissance consort by Adrian Brown after instruments in the Kunsthistorisches Museum, Vienna

These recorders have a range limited to about an octave and a minor seventh with a bold, rich timbre which is even in quality and dynamic level throughout their range. They are ideally suited to the performance of the polyphonic vocal and instrumental music of the late fifteenth to early seventeenth centuries, blending readily and in balance with each other in whole consorts or contrasting on equal terms with other renaissance instruments or voices.

A unique set of so-called “columnar” recorders was made by Hans Rauch von Schratt/Schrattenbach (early 16th century). The larger instruments in this set have bores doubled back on themselves in the manner of a dulcian or bassoon to extend the range downwards. There are five such recorders in existence: a soprano in Frankfurt, an alto in Brussels, another alto in a private collection in Japan (auctioned by Christies in 1988), and a tenor and basset in Paris. Details of each can be found here. 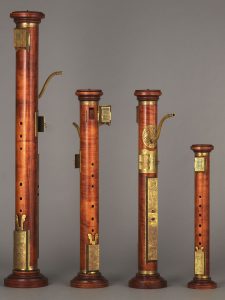 To date, it has not proved possible to trace an unequivocal development from the ensemble recorder of the Renaissance to the solo instrument of the Baroque. Rather, makers in different parts of Europe, presumably independently of each other, seem to have endeavoured to accommodate the Renaissance recorder to the demands made by the emerging styles of instrumental music. These efforts ended abruptly at the close of the seventeenth century when the Baroque recorder suddenly appeared and in a very short time superseded the older types.

One of the so-called Catajo recorders,
Kunsthistorisches Museum, Vienna , SAM 130

Instrument makers of the 17th century did not manage to establish a real tradition, and that can perhaps justify classifying their recorders as “transitional instruments” (Bergstrøm 2002). Surviving examples of such instruments include the Rosenborg, Dean Castle and Århus recorders, and a recorder in the Vienna, Kunsthistorisches Museum (SAM 130), all of which have been used as models for instruments on which to perform the music of Jacob van Eyck. 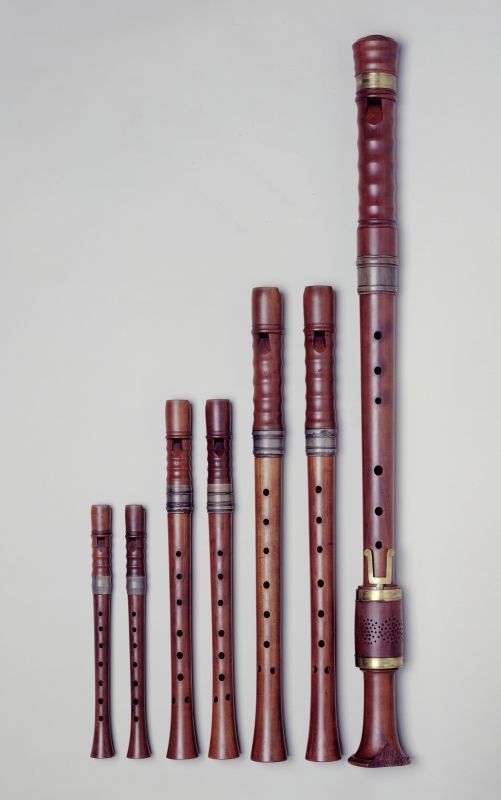 Wave-profile recorders by Hieronimus Franciscus  (1636–1686),
from the Germanische Nationalmuseum, Nuremberg

Instruments by Haka, Kynseker, Rafi and others are characterised by an extended upper range, ornamental rings at the foot and above the labium and longer windways. “Wave profile” turning and sometimes a highly flared bell also fall into this category, often termed “early baroque” recorders (Legêne 1995).