Home > History > How the recorder got its name

How the recorder got its name

Outside England there was no single word to differentiate the recorder from other kinds of internal duct-flute or from the equally popular transverse flute.

Although Chaucer’s Canterbury Tales (1340-1400) makes no direct reference to the recorder it is possible that, if he wasn’t whistling, Chaucer’s gay young Squire who was “Syngynge … or Floytynge, al the day” played a recorder, the ultimate expression of uselessness. In his House of Fame (1379-1380),  Chaucer makes reference to woodwind musicians “that craftely begunne to pipe, both in doucet and in rede”. This has been taken to imply recorders and shawms respectively.

However, the earliest unequivocal reference to the recorder as such is provided by the household accounts of the Earl of Derby, Henry Bolingbroke  (later King Henry IV) for 1388 which mentions 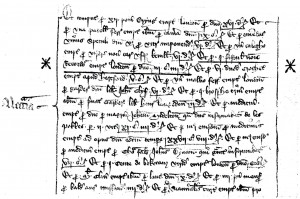 The superscript horizontal line and slash following the ‘o’ is an abbreviation for ‘ur’ in English court hand. Thus although the critical word looks like ‘Recordo’ it should really be rendered ‘Recordour’ and the entire entry should be translated

“And for one flute by name of Recorder bought in London for my lord, three shillings and four pence.”

Note that whereas the word ‘fistula’ (flute) is treated as a common noun, ‘Recordour’ is treated as if it were a proper noun like ‘London’, and that it is qualified by the word ‘nomine’. This would seem to indicate that both the word and the recorder itself were new to the language or unfamiliar. 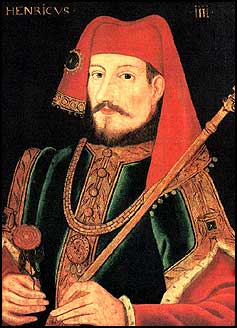 It is possible that the recorder purchased on behalf of the Earl of Derby was for his own use. The future King Henry IV was a keen amateur musician (Trowell, 1957). Indeed, a piece in the early 15th-century Old Hall manuscript is ascribed ‘Roy Henry’, though the latter might refer to his more famous son who became Henry V. It is tempting to think of the Earl of Derby playing music with his wife: among the purchases ‘pro domina’ for the Countess of Derby are strings and pegs, presumably for her gittern (Rowland-Jones, 2001).

Galfridus Anglicus’ English/Latin dictionary, Promptorium Parvulorum  (1440), gives “recorder or lytyll pype” as the translation of ‘canula’ citing an earlier dictionary the Campus Florum (c. 1335) as the authority. This latter is not  the book by Thomas Wallensis of that same title in the library at Peterhouse, Cambridge, which consists of short tracts from the fathers and canonists, alphabetically arranged. But it could be a second work of the same name by the same author, an English-Latin vocabulary, known to have existed but now lost. In all likelihood, Thomas merely passed on earlier definitions of choraules [Gk χοραύλης], the leader of the chorus who played either canulae or fistulae] and that the compiler of the Promptorium simply added the up-to-date equation with recorder.

The recorder’s English literary debut (in the form ‘recorderys’) seems to have been John Lydgate’s Temple of Glas: Allas for thought (c. 1430), where it appears in the hands of a shepherd in a pastoral setting:

Before this time Lydgate made reference only to to the ‘pipe’ and ‘floyte’ and their cognates, not to the recorder as such.

In Lydgate’s The Fall of Princes (1431-1438), the recorder appears again  in a pastoral setting but this time in the hands of a  supernatural being:

The Fall of Princes is a translation in 36,000 lines of a French version of Boccaccio’s De Casibus Virorum.

Many of the early poetic references to the recorder are to be found amongst those interminable lists of which the medieval mind was so fond. My favourite example is Richard de Holland’s Buke of the Howlat (? 1450):

As we have seen a ‘canula’ could be a recorder or a ‘lytyll pype’. Thus a recorder could be a pipe, also. This confusion (and more) is amply documented in literature. For instance, it is made as clear as mud in a wonderful punning passage in Anthony Copley‘s Wits Fittes and Fancies (1595) which pivots around this confusion and even brings in some botany, too:

“A merrie recorder of London mistaking the name of one Pepper, call’d him Piper: wherunto the partie excepting, and saying: Sir, you mistake, my name is Pepper, not Piper; hee answered: why, what difference is there (I pray thee) between Piper in Latin and Pepper in English; is it not all one? No, Sir, (reply’d the other) there is even as much difference betweene them, as is between a pipe and a recorder.”

Another and far more curious appellation for the recorder was that of ‘still pipe’ or ‘still flute’. The first use of the general term ‘still music’ seems to have been in the Privy Purse expenses of King Henry VII for the period 1485-1509 which notes payment to “styll mynstrells”, presumably purveyors of soft and fragile music.

On New Year’s Day, 1511, King Henry VIII (who played the recorder himself, in his youth) also employed “styll mynstrells” who were paid rather better than their louder brethren, the sackbut (or trombone) players. Needless to say, “the Queen’s mynstrells” fared worse than either! Henry VIII in old age, playing harp, with his fool,
Will Summers; from The King’s Psalter, British Library

In George Gascoigne’s Jocasta (1579) we find the stage direction:

“Before the second Acte, did sound a very doleful noise of flutes … In the order of the fifth and last dumb show, first the still pipes sounded a very mournful melodye, in which time there came upon the stage a women clothed in a white garment …”

In John Marston’s Antonio’s Revenge (1600/1602) “still flutes sound softly” while Strotzo stages his repentance and dies with the question on his lips: “What strange portent is this?”

In The Two Noble Kinsmen (1613/1634) a joint effort of John Fletcher and William Shakespeare “still music of records” is indicated for a scene involving sacrifice and portent.

The term ‘still music’ is employed for the last time when recorders are called for to accompany Cupid in Thomas Heywood’s Love’s Mistress (1634).

The word ‘flute’, too, could imply recorder rather than the transverse flute, and indeed it usually did so until late in the 18th century.

During the Civil War (1642-1660) the theatres were closed and many stage musicians fled to the continent where they could make a living. On their return, the wind players amongst them came equipped with instruments which were the latest in French technology. The recorder was now in three parts with a far more sophisticated bore giving it an extended range and a tonal character of far greater flexibility.

It was probably this baroque recorder that so enchanted Samuel Pepys when he heard them played at the 1667 revival of Philip Massinger & Thomas Dekker’s The Virgin Martyr:

“Not that the play is worth much … But that which did please me beyond any thing in the whole world was the wind-musique when the angel comes down, which is so sweet that it ravished me, and indeed, in a word, did wrap up my soul so that it made me really sick, just as I have formerly been when in love with my wife; that neither then, nor all the evening going home, and at home, I was able to think of any thing, but remained all night transported, so as I could not believe that ever any musique hath that real command over the soul of a man as did this upon me; and makes me resolve to practice wind-musique, and to make my wife do the like.”

This new style of instrument brought with it yet another name, that of ‘flute douce’. In George Etherege’s The Man of Mode (1676) Sir Fopling Flutter asks:

“What, you are of the number of the ladies whose ears are grown so delicate since our operas, you can be charmed with nothing but flutes doux and French hautboys?”

There is a rather pointed counterpart to this passage in Thomas Shadwell’s A True Widow (1679):

“But how go matters in France? What new foppery is turned up trumps there?”
“Wit and women are quite out of fashion; so are flutes doux and fiddlers; drums and trumpets are their only music.”

Shadwell may simply be implying that the French are now only interested in war – women surely never go out of fashion! In fact, the decline of the recorder in France dates from about 1700 when La Barre astounded society with his flute-playing, followed later by Blavet.

The verb to record

The English verb ‘to record’ meaning ‘to get by heart, to commit to memory, to go over in one’s mind, or to repeat or say over as a lesson’, dates from as early as 1225 (OED2).

Lay al this mene whyle Troilus,
Recordinge his lessoun in this manere,
`Ma fey!’ thought he, `Thus wole I seye and thus;
Thus wole I pleyne unto my lady dere;
That word is good, and this shal be my chere;
This nil I not foryeten in no wyse.’
God leve him werken as he can devyse!

And in the Golden Remains of the ever memorable Mr John Hales of Eaton College (1656) we read that:

“The Husband-man (faith St. Hierome) at the Plough-tail may sing an Hallelujah, the sweating Harvest-man may refresh himself with a Psalm, the Gardiner whilest he prunes his Vines and Arbors, may record some one of David’s Sonnets.”

It often seems to be overlooked that, whereas the instrument ‘the recorder’ seems to have acquired its name before or in 1388 (household accounts of the Earl of Derby), the old verb “to record” seems to have been applied to birds for the first time somewhat later.

“Therfore first recorde thou, as birde within a cage,
… thy tunes tempring longe,
And then … forth with thy pleasaunt songe.”

And in John Palsgrave’s L’esclarcissement de la langue francoyse (1530), a grammar of the French language for English readers,  we find the following entries:

The term “fleute a neufte trous” indirectly furnishes the earliest corroboration of the meaning of ‘recorder’ in English.

A tree might just as well “whistle melodies” by being turned into a recorder.

And in John Lyly’s Euphues and his England of the same year we find:

“Where vnder a sweete Arbour of Eglentine, be byrdes recording theyr sweete notes  …”

“The lark is mery and records her notes.”

Also in 1595, Valentine, one of Shakespeare’s Two Gentlemen of Verona, muses:

“Here can I sit alone, unseen of any,
And to the nightingale’s complaining notes
Tune my distresses and record my woes.”

“…… to the lute
She sung, and made the night-bird mute,
That still records with moan.”

In this context, it is worth mentioning the delightfully silly English preoccupation with training caged birds to sing. The Bird Fancyer’s Delight Hills (1717) describes how this may be done with a variety of species including nightingale, bullfinch, blackbird, canary, woodlark, skylark, linnet, parrot, mynah bird and house sparrow by placing them in a darkened cage and playing a suitable tune to them over and over again on a bird flageolet or a small recorder. For more on teaching birds to sing with played examples from The Bird Fancyer’s Delight, see here.

Anthony Rowland-Jones (2014) has further suggested that the name ‘recorder’ was adopted for this instrument in reference to its use to assist singers who would otherwise find it difficult to hold their parts in tune and in time. The very portable recorder would have been a convenient aid to learning, rehearsing and even performing such music. Eventually, with three instruments, a piece could be repeated (‘recorded’ ) to give the singers a rest and a change of sound for the listeners.