A skeleton in the cupboard

Although today it is uncommon to encounter staged skeletons in a medical museum context, they are part of a rich, macabre history, popular in the 17th and 18th centuries.

In the University of Melbourne’s Harry Brookes Allen Museum of Anatomy and Physiology, a deformed skeleton, a little over 70 cm tall, sits playing his wooden recorder, as he has done so for some 200 years! This rather confronting exhibit was purchased in Europe for the museum in 1862 by the firm of Raginal and Co. on behalf of the foundation Professor of Anatomy, Physiology and Pathology at the University of Melbourne, George B. Halford. At that time, it was said to have been have been prepared by Parisian doctor, Jean-Joseph Sue fils (1760–1830), and to comprise the remains of a 28-year old cripple who played the instrument on the steps of one of the Paris churches.

The flautist’s most striking feature is its single leg, where two femurs or thigh bones bend and join at the knee. Descending from the single kneecap is a pair of shin bones — a tibia and fibula — and a whole right foot. It is said to be an example of sirenomelia, a rare condition that affects the development of organs of the lower abdomen, pelvis and legs. In particular, sirenomelia fuses the patient’s, legs, which is why it’s sometimes called mermaid syndrome. It is a very severe affliction and those that survive birth today must endure multiple operations to separate their legs and repair malformed organs.

Although Halford was advised the skeleton had reached 28 years of age at the time of death, a recent analysis of X-rays reveals the skeleton to be around 18 years of age, of Caucasian origin, and indeterminate gender, and that the fused leg could be evidence of either sirenomelia or rickets, a condition caused by vitamin D deficiency, is evident from the curved leg and arm bones. Unlike sirenomelia, rickets was very common in the 18th century. It seems most likely that the person was born with two legs, and that their curved femurs allowed the Parisian preparator to exercise a little artistic license, lose a shin, and instead create a skeleton with a single leg. 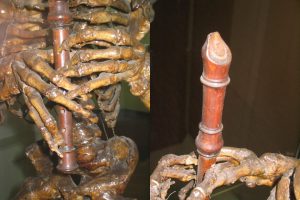 Although much has been written about the skeleton, its medical peculiarities and its origin, the recorder itself seems to have escaped critical attention. To my eye, it looks convincingly real. Judging by its three-part construction, seemingly undercut finger-holes, curved beak and ornamental turning it appears to be of 18th-century manufacture.  The lack of a raised bead in the middle of the bulbous turning at the bottom of the head-joint reminds me of a number of ivory instruments by members of the Hotteterre family of woodwind instrument makers instrumentalists and composers who are sometimes credited with many of the important changes that took place in the construction of woodwind instruments during the mid- to late-17th century, amongst them the development of the three-jointed recorder from that in one-piece. A piece of wood seems to have been fixed into the rear of the block to give someone a means of pulling it out of the instrument, although this is more usually done by inserting a thick dowel inside the bore and striking it with a small mallet. And the lowermost joint of the instrument is missing the flared foot and bell, as if in support of the anatomists joke alluded to by Milk (loc. cit.)