The curious lateral hole towards the foot of the Würzburg fragment together with a small groove around its base and a typical crack running exactly through the lateral hole have been taken by Weber (1976) to indicate end-stopping by means of a plug inserted in the bore. The groove may have carried a wire to counteract the tendency of this to split the wood. Thus, Weber interprets both the Dordrecht and Würzburg fragments as end-stopped or partially end-stopped recorders reminiscent of certain internal-duct flutes of the Middle East described by Picken (1975)

Loretto (1998) also argues for a partially closed extension covering the foot tenon of the  Dordrecht recorder to give a lowest note of c#” at A440. In support of this, he notes the  exceptionally large cut-up of 7.6 mm (a bass recorder works well with a cut-up of 7 mm!) which leads him to suspect that the original labium was damaged and that the cut-up was at first ca 4 mm. Loretto reasons that slicing away the damaged labium increased the cut-up; the block was pushed further into the windway (it now protrudes 3.5 mm) to compensate for the unfocused sound; and, since this didn’t work, the instrument was discarded.

In support of his conjectural windcap and foot designs, Fitzpatrick (1975) cites an illumination from a thirteenth-century, Ms Douce 62 and The Month of April, a painting by Francesco del Cossa of c. 1470 (Palazzo Schifanoia, Ferrara) as illustrations of recorders with an implied headcap and beaded foot like those of the Dordrecht instrument. From the excellent reproduction of the latter painting in Grunfeld (1974), Moeck (1984: April) and elsewhere, it would appear that Fitzpatrick is in serious error on this count since the instruments here are clearly of the one-piece, flared-bell (possibly choke-bore) style. Furthermore, the lack of sidewalls on the windows of the recorders depicted here makes them very different from the Dordrecht recorder.

The lack of sidewalls to the window can be seen, too, in the sketch of a recorder in the first known treatise, a five-leaf manuscript booklet now in the Universitätsbibliothek in Basel, probably written out for the 15-year-old Bonifacius Amerbach  (Anonymous  c. 1510). 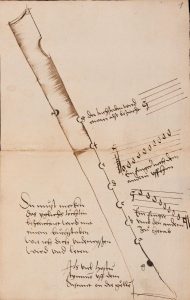 Horace Fitzpatrick, Brian Carlick, and Alec Loretto and others have reconstructed the Dordrecht instrument as more-or-less conventional open-ended recorders resembling those depicted in medieval art. 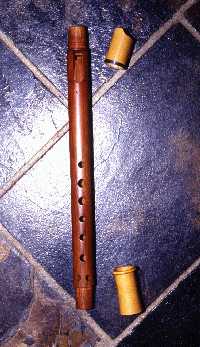 Reconstruction of the Dordrecht recorder by Horace Fitzpatrick

The slight extension of the bore achieved by means of the addition of such a foot-piece allows the instrument to be played fairly well in tune at the octave at c. C=517, close to modern pitch. With suitable fingerings and in the hands of a skilled player a two-octave range is possible. These instruments are sweet and keen in tone, but rather quiet. Using his Dordrecht copy as a model, Fitzpatrick made similar instruments a fourth higher and a fifth lower to produce sopranino and alto models respectively, thus creating a high-pitched consort, as has Loretto. 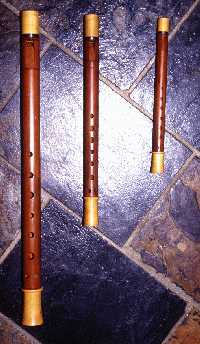 Italian recorder-maker Francesco Li Virghi has made reconstructions of the instruments  depicted by Cossa (see above) which are of cylindrical bore and lack the sidewalls of the  window. Their tone is bold and characterful with a decided “chiff” to the attack. 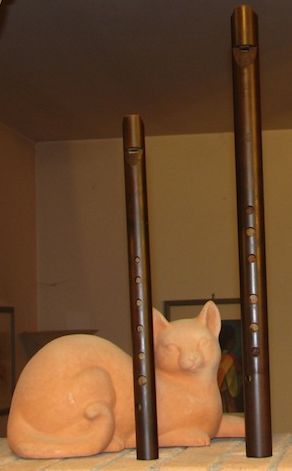 Hans Reiners  (Hakelberg 1995,  Reiners 1997) has made a reconstruction of the Göttingen recorder described as  strident and penetrating in sound, which has a range of  an unexpected two octaves, extending into a third octave with fingerings rather like those provided by Ganassi,  although the cats fled in anguish  when the instrument’s higher reaches were sounded. Reiners describes the tone as  not very subtle, but remarkably even and strong throughout. Interestingly, his reconstruction showed that the interval obtained by opening the seventh finger hole was semitone rather than a whole tone.

Reconstruction of the Goettingen recorder by Hans Reiners

Hakelberg (1995) has suggested that this may also have been true of the Dordrecht recorder and that the desirability of a leading note as the bottom note of a recorder based on a Dorian or Ionian scale makes perfect sense. Doht (2006) reports that the range of another   reconstruction of this recorder has a smaller range, namely an octave plus a minor second in the lower register and a fifth in the upper register.

Ukrainian recorder-maker Eugene Ilarionov has made reconstructions of the Elblag  recorder in d” and c” and of the Tartu recorder which also have the interval obtained by opening the seventh finger  hole a semitone rather than a whole tone.

Reconstructions of the Elblag recorder by Eugene Iliarianov

Tim Cranmore has constructed a consort of recorders based on the Tartu instrument, again with the lowest interval a semitone. sSAT Consort based on the Tartu recorder by Tim Cranmore

Several contemporary makers have constructed medieval-style recorders to their own largely speculative designs. James Bartram used to make a cylindrically bored alto recorder in g’ which he describes as having a bright, intense sound well suited to mixed-consort use. Phil Bleazey makes a cylindrical bore recorder with open voicing which plays over two  octaves with accurate tuning and is available in simple, Dordrecht or Göttingen profiles. Bleazey notes that the dents around the bulbous end of the original Göttingen instrument may indicate it’s possible use as a drum beater. As well as his reconstructions of the Dordrecht recorder, Brian Carlick produces wider bore instruments of louder tone in a range of sizes. The late John Hanchet made sopranino and soprano recorders based on a study of the Dordrecht instrument, modern folk instruments and iconography which have a bright and uninhibited tone indeed (Snelling 1986) and which are capable of playing chromatically into the third octave and an alto which plays almost two octaves (Rowland-Jones, pers. com.) Thea Miller & Susan Anderson have made a consort of cylindrical bore recorders pitched in f”, c”, g’, f’ and c’ each with a one-and-a-half octave range: they describe the tone of their instruments as open, clear … and overall less forceful and penetrating than later recorders.

Details of all current makers of medieval-style recorders of whom I am aware can be retrieved here.

No originals of the Virdung/Agricola style of recorder survive. The late John Cousen and Carl  Hanson made conjectural models based on these drawings, namely alto, tenor and  basset instruments. These have a near-cylindrical bore and produce a characteristic ringing sound.

Roland Kraemer offers a consort of recorders after Virdung. Adrian Brown makes a consort of alto, tenor and basset cylindrical recorders with three differently shaped bells each of which gives the instruments characteristic playing and tonal qualities.

Details of current makers of Virdung/Agricola-style recorders can be retrieved here.

The Ganassi-style recorder has been the subject of a great deal of research and debate (Loretto 1995). Since no instruments survive with the necessary playing characteristics, the accounts of their technique by Ganassi (1535) and Cardano (1546) together with iconographical evidence from the period have provided the springboard for modern  reconstructions by a number of makers. For the most part, these reconstructions adopt a  near-cylindrical bore with a pronounced flare at the bell. Details of current makers of  Ganassi-style recorders can be retrieved here.