The Recorder as an Instrument of Torture

Music is, perhaps, the only art form used as a means of torture. Amongst CIA interrogation techniques employed for coercive purposes is a list of songs and performers reportedly used to “torture” detainees that British human rights group Reprieve has posted on its Web site. This sinister catalogue of tunes ranges from AC/DC’s Hell’s Bells, a heavy-metal ditty that sounds as though it had been recorded by an orchestra of chainsaws, to such seemingly innocent fare as Don McLean’s American Pie and the Bee Gees’ Stayin’ Alive. Most of the records cited by Reprieve have one thing in common: they are deafeningly loud. But the presence on the list of songs from the children’s television programs Barney the Dinosaur and Sesame Street, staples of USAmerican children’s TV programming, suggests that the successful use of music as a tool of coercion entails more than mere volume (for more on this see Wikipedia 2003–2021 and  Teachout 2009).

The Mocking of Jesus

The shrieks and groans of recorders in the hands of children and enthusiastic amateurs sometimes seem to offer a foretaste of eternal torment. There is nothing new about this association. Indeed, since its very first appearance, the recorder has been associated with torture.

From my survey of more than 4,000 depictions of the recorder (Lander 1996—2021), the very earliest illustration of a recorder as such is in The Mocking of Jesus (after 1315), a fresco from the Church of St George, Staro Nagoričane, a village near Kumanova in (Yugoslav) Macedonia, by the court painters Michael Astrapas and Eutychios, in which a musician plays a cylindrical recorder, the beak and window/labium of which are clearly visible, as are open holes beneath three lifted fingers of the player’s uppermost (left) hand and four holes for the fingers of the lowermost hand (also off the instrument). 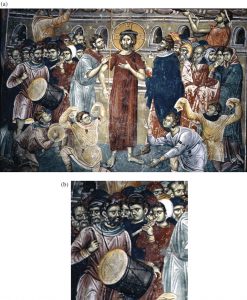 This painting is very different from the stereotyped frescoes of the same period found elsewhere in the region, and it may record a theatrical performance of an earlier time. Data from the religious literature of thirteenth-century Serbia reveal that church authorities forbade their congregation to attend gatherings where actors performed. In the work Eulogy to Saint Simeon and Saint Sava, Teodosije (1264–1328), a monk at the Serbian monastery of Hilandar and a writer, pointed out that opposed to the heavenly beauty of the church was “the actor’s odious theatre” which had been organised on the street and to which people gathered, regardless of the weather, where they watched and listened insanely to harmful devilish songs and indecent, rude words all the way to the end. The traits of once-staged scenes and old sport festivities lived on in the Serbian milieu during the fourteenth century as well (Marjanović 1995).

Although not mentioned in biblical accounts, a number of depictions of the mocking of Jesus include musical instruments as implements of torture. Of these, only one other includes a recorder, namely The Mocking of Christ (c. 1515–1520) by Lucas I Cranach (1472–1553). Cranach shows the various humiliations Christ suffered before his Crucifixion. The composition has been said to draw on Albrecht Dürer’s The Mocking of Christ in a woodcut of circa 1508-11 that was included in his influential Small Passion print series (Koepplin 2018).  However, the depiction of this scene by Astrapas and Eutychios (see above) hints at a much older tradition. Cranach’s painting conflates the various Gospel accounts given of the mocking of Christ and shows him already clothed in a robe of royal purple, in which he was dressed before he was crowned with thorns. Each of the figures mocking Christ is given exaggerated, grotesque features, emphasising their sin in mocking Christ and heightening the humanity of Christ’s suffering. Described in Psalm 22 as “dogs . . . the assembly of the wicked”, each is engaged in a different form of mockery, from the man in the red hat who pokes his tongue out at Christ, while pulling a lock of his hair, to the two men who prepare some fouled water which another sprays into Christ’s face, and the Roman soldier who mocks the partially blindfolded Christ by putting a duct flute (probably a recorder) to his lips. A copy of this work is in the Castle Picture Gallery, Prague; another was auctioned by Lempertz, Cologne, in 2013. 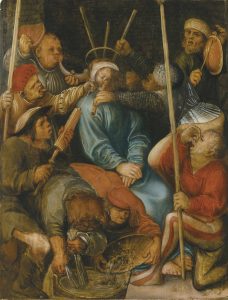 The Flute of Shame

Paradoxically, devices resembling recorders but designed as instruments for physical punishment can be found in museums and in artworks from northern Europe, the so-called Schandflöte or “flute of shame”.

Surviving instruments of torture in the form of the recorder, trumpet trombone, oboe, etc., made of brass or iron are probably of Dutch origin and, for the most part, date from the 17th and 18th centuries, although examples from earlier and later sources are also known. The iron necklace was closed behind the neck of the victim whose fingers were positioned like those of a musician under the notches in a clamp which was tightened by means of the screws, enabling the application of pain or the crushing of flesh, bone and gristle.

Such torture was essentially a form of public humiliation with all the attendant painful and sometimes fatal consequences that accompany a fall from grace. It was used to punish misdemeanors: disbelief, blasphemy, speaking against the order, etc. 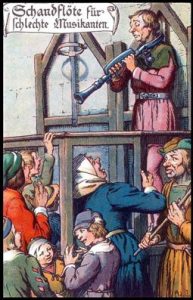 Some modern commentators have suggested that that these instruments were for the castigation of incompetent musicians but, in an age when torture was commonplace, bad musicians were simply removed from the band or orchestra, whereas their occasional indiscretions, like those of any other craftsmen, were usually met with a cuff about the ears rather than torture or mutilation.