The Hype about HIP

An 18th-century Recording of Handel’s Recorder Sonata No. 4 in F Major

A recording of an 18th-century barrel organ version of a familiar recorder sonata by Handel (1685–1759), also known from an organ concerto, is, in effect, the nearest thing we have to an 18th-century recording. The barrel organ concerned was “pinned” by John Langshaw (1717–1798), an organist and mechanic,  but the music itself was arranged by John Christopher Smith Jr (1712–1795), the son of Handel’s principal copyist and later his amanuensis. Smith Jr was himself an opera and theatre composer of some skill. Strange to tell, the only recording of the recorder sonata that I know of making use of this seemingly authentic information is on a 1973 LP featuring David Munrow, namely The Amorous Flute. So much for all the hype about HIP!

The chamber barrel organ by John Langshaw in the collections of Lancashire Museums is currently on display at the Judges’ Lodgings museum in the city of Lancaster, England. Each of the three barrels is pinned with 10 airs. The 30 pieces preserved at Lancaster include “See the Conquering Hero Comes”, the best-known number from Handel’s oratorio Judas Maccabaeus. Langshaw lived in London in the years either side of Handel’s death in 1759. While Lancashire Museums suggest that he knew Handel, other sources suggest that his reproductions of Handel’s music began after the composer’s death. 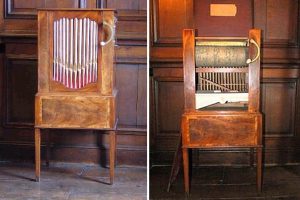 The organ was built c 1790 and is of a size suitable for use in a middle-class home. It has four ranks of pipes (stops) and three barrels. The barrels are inscribed “John Langshaw / Organ Maker / Lancaster”, and are assumed to be the barrels originally housed in the instrument. The mahogany case is attributed to Gillows, a Lancaster furniture making firm with which Langshaw is known to have collaborated.