Smurfs and the Recorder

Under the pseudonym Peyo, the 20th-century Belgian cartoonist Pierre Culliford (1928-1991) created the Smurfs, a tribe of blue dwarfs living in a village of mushroom houses deep in the forest. The hyperactive Smurfs were, in a sense, latter-day nani di bambocciate with whom they had much in common.

The Smurfs first appeared in a comic in the series Johan et Pirlouit, published in Belgium in 1958 and were an instant success. They have since appeared in a total of 25 languages and the Smurf craze spread to the world of toys, lunchboxes, video games, colouring-books and any other merchandising tie-in imaginable. They became so popular that, after appearing in nine 13 mm films, in 1976 they starred in the feature-length La Flute à Six Schtroumpfs. Peyo then introduced the wise old Papa Smurf and the coquettish Smurfette, who long remained the only woman in the dwarfs’ adventures. In 1984 the movie travelled across the Atlantic with dubbed voices as The Smurfs and the Magic Flute. And, yes, the “magic flute” was an outsized recorder — in remarkable synchronicity with their 17-18th-century antecedents, the bambocciate! Here are some memorabilia. 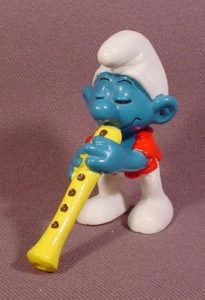 A Smurf wearing a red shirt, white cap and boots, plays a clearly depicted duct flute larger than himself. The instrument was probably intended to be a recorder, though only four finger holes are visible. Smurf figurines were manufactured by Schleich in Germany and Hong Kong. 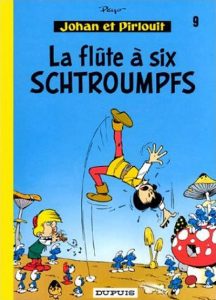 On 23 October 1958, Peyo introduced a new set of characters to the Johan et Pirlouit series. This alone caused no great excitement, as the brave duo constantly encountered strange new people and places. This time, they had the mission of recovering a Magic Flute, which required some sorcery by the wizard Homnibus. And in this manner, they met a Schtroumpf. Johan and Pee Wee (aka Peewit, aka Pirlouit), a brave human prince and his page are trying to retrieve Johan’s stolen magic flute, endowed with the power to make all listeners dance uncontrollably. With the help of Homnibus, Johann and Pee Wee recruit Papa, Brainy, Hefty and the bunch to aid their cause. The ever-generous Smurfs build a duplicate flute, helping Johan prepare for a showdown with the thief, a villain named McCreep (aka Oilycreep). 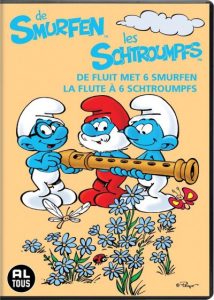 Based on the comic book, the film was directed by Eddie Lateste. First aired on Belvision in 1976, it was brought to the United States by Stuart R. Ross who acquired the North American rights to the film and produced the dubbed English language version at the Hannah-Barbera Studios. It was presented to US audiences by Ross and Atlantic Releasing Corp. 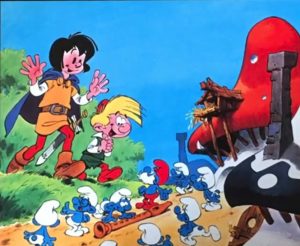 A scene from The Smurfs and the Magic Flute 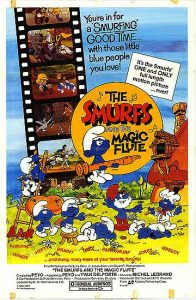 An advertising poster for the Smurfs’ full-length cartoon film (see above). In their village, the Smurfs have just finished constructing a replica of the stolen flute. One of the Smurfs holds the finished instrument, a large duct flute, probably a recorder though only six finger holes are visible.

The Smurfs original NBC run was hugely successful, airing more than 258 episodes with a total of 419 stories between 1981 and 1989. Those who enjoyed their TV adventures will be delighted to know that after a 30-year break the Smurfs series is being rebooted and was premiered on Nickelodeon in September 2021. Now you can re-live your misspent youth!