Leonardo’s inventiveness manifested in his many designs of all kinds of machines and artefacts, some of them were precursors of objects being built centuries later, like the submarine or the helicopter. Some of his designs were musical instruments, for example, two flutes drawn on sheet 110r of the Atlantic Codex –  Emmanuel Winternitz (1982).

The page of Leonardo da Vinci’s notes in Codex Atlanticus Folio 1106r (1498) is full of drawings and appears as chaotic as most of his writings. 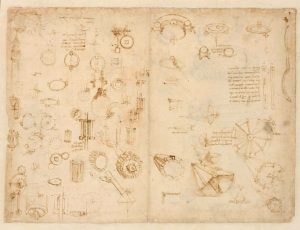 Among the various subjects is a paragraph tied to a sketch of two unusual end-blown duct flutes which allow players to vary the pitch from one note to another in a continuous way, without fixed intervals, because of the smooth, uninterrupted fissure(s) they have instead of the more usual finger holes. Following Leonardo’s indications, a flautist can modulate a note’s intonation to their liking by moving their hands over the fissure, thus producing all the intermediate sounds among the hypothetical positions of the holes on a traditional flute (as Leonardo writes, also at 1/8 and 1/16 tonal intervals).

Accompanying the drawings, a brief description (written in reverse) reads:

[These two flutes do not produce sounds at intervals but rather in the manner of the human voice. This sound is produced by moving your hand up and down, as on a folded trumpet and more so on pipe a; and you can also produce sounds at tone intervals of 1/8 and 1/16, just as you want.]

Note that Leonardo was left-handed and used a form of mirror writing. Obtaining an eighth or sixteenth of the tone obviously means to reach the upper octaves; and moving the hand up and down evidently means not to stop prearranged finger holes but to move along the slits to change pitch gradually. These have been called fissure flutes or glissando flutes, since one note slides on to another lower or higher in pitch passing by all intermediate frequencies.

Unfortunately, the text does not include data on the dimensions of the flutes or clear clues to their intended use. In experiments carried out in 2019 by Italian recorder maker Giacomo Andreola it was found that flute b (with two slits) can work if it is a little longer than flute a, because its two grooves are shorter, but in that case they cannot be closed with one hand and in da Vinci’s drawing you can see that it has a length equal to flute a (with a single slit). This raises the question of whether da Vinci was able to build and operate his flutes and observe the functional effects described in the text. In the case of flute a, the groove must be less than the length of the player’s extended index finger; in flute b each of the two grooves must be equal or shorter than the width of four fingers together. In Giacomo’s experimental reconstructions flute b was found to be the most effective and efficient, with each slot 5.5 cm long. 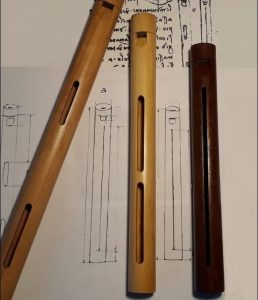 Giacomo’s reconstructed fissure flute can be seen and heard in two delightful performances as follows:

The viola organistra, another of Leonardo’s astonishing musical inventions, was built by Sławomir Zubrzycki himself in 2012. If you would like to learn more about Leonardo’s musical instruments the Selected References below might serve to whet your appetite. 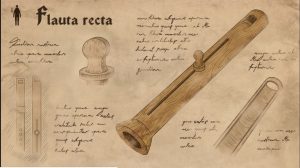