Involuntary compositions for recorder by Bartók

The longest and most comprehensive book concerning the recorder in all its aspects is A furulya (The Recorder)  by János Bali, a distinguished Hungarian choral and orchestral conductor, baroque flautist and recorder player/teacher. János kindly sent me a copy of his book when it was first published, as long ago as 2007. I surveyed it superficially then and, whilst I was astonished by its scope, I found it had one serious drawback. It is written in Hungarian, one of the most difficult languages to construe, largely because its 35 cases, flexible word order, and extensive use of prefixes and suffixes encourage a highly creative use of grammar, to say the least. In these piping times of plague, armed with Google Translate and a textbook of Hungarian grammar, I have set about exploring A furulya more fully. Whilst much of the book covers familiar ground there is much that is new, here. Amongst other novelties, I was pleasantly surprised to find that three of Béla Bartók’s compositions are, in effect, involuntary compositions for the recorder (Bali 2007: 239–240). 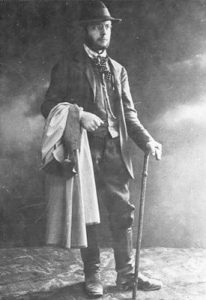 Béla Bartók on a field trip in Csík county, circa 1903,
by Transylvanian Hungarian photographer István Kováts (1881-1942)

Amongst Bartok’s many compositions based on folk songs is a group of three from Gyergyó in the Csík District of Hungary, now in Romania (eastern Tansylvania), where it is known as Gheorgeni. They were scored by Bartók for ’tilinkó’ (overtone flute) and piano. Written in 1907, they were not published until after the composer’s death by Denijs Dille, using the manuscript in his possession. It seems that Bartók heard the first of these three songs performed on a shepherd’s flute, but mistook the peasant instrument for the rarer tilinko, a Hungarian overtone flute with no fingerholes and thus unable to play Bartok’s music. Captivated by its sound, the composer initially fashioned these pieces for the imagined tilinko with piano accompaniment (BB 45a), but later recast them for solo piano (BB 45b).

An arrangement specifically for recorder and piano, by Denijs Dille, is also available (see below).

It is thought that Bartók himself played the traditional ‘furulya’, the wooden duct-flute of Hungary and a relative of the recorder (Bali 2007: 249). It is 30-50 cm long and 14-18 mm in diameter, with six fingerholes. The term ‘furulya’ is combined with other terms to denote different types of flutes in Hungary. Significantly perhaps, in Hungarian the recorder itself is named simply ‘furulya’! Performing these striking and haunting pieces on recorder and piano would seem an obvious undertaking, and yet I know of but one such recording (see below). Meanwhile, here are some recordings I found interesting and which feature various instruments, to whet your appetite. You can find plenty more on YouTube.