I have long had a particular interest in recorder iconography, the representation of recorders and similar instruments works of art through the ages. There is much to learn from my survey of some 4,000 such items which is freely available on this website (Lander 1996–2021), but there is also much to enjoy.

Recently, I stumbled across a delightfully silly collection of coloured postcards depicting anthropomorphic cats in all sorts of common situations, first published in Switzerland in the years leading up to the second world war. Amongst this extensive suite of images, at least four feature recorders. The images themselves were the creation of the Swiss painter, muralist, theatre set designer and children’s book illustrator Eugen Hartung (Wäldi, 1897 – Zürich, 1973). In addition to his cats, Eugen Hartung also painted postcards with mice, dogs and even hedgehogs in a similar style. 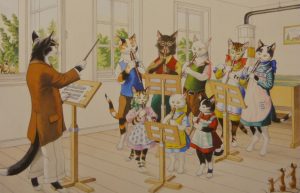 In a classroom, a feline music teacher conducts his recorder band of eight cool cats, who are watched by a trio of appreciative mice. It crossed my mind that the composition the cats are playing might be by Aram Cataturian. And I think those rodents are in for a shock when the lesson is over. 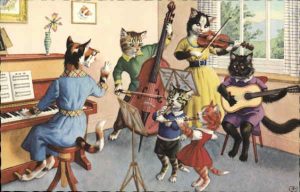 A piano-playing mother cat conducts a quintet of three young cats and two kittens playing double bass, violin, guitar and two recorders. I wonder if the music they are playing is by Claude DePussy. 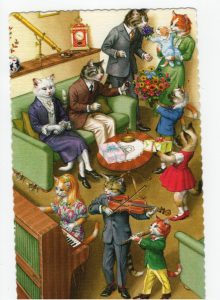 Cat family members celebrate grandfather’s birthday with presents, a bunch of a flowers and a performance by a trio of kittens playing piano, violin and recorder. I expect that their program featured Mozart’s Eine kleine Nachtmeowsik. 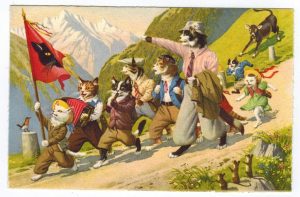 Watched by a robin and three mice, and chased by a calf, a group of young cats and their teacher hurry down an alpine path. A kitten leading the procession carries a flag; he is followed by two of the company playing a concertina and a small recorder. Surely The hills are alive with the sound of mewsic!

If you would like to learn more about Eugen Hartung and his cats and other beasts then the website maintained by Thomas Städeli (2019) will keep you amewsed for hours.