Recorders in the strange world of Faustino Bocchi

Faustino Bocchi (1659–1742) was an Italian artist active in Brescia who specialized in bizarre genre paintings of dwarfs, specifically bambocciate di nani or arte pigmeo . He appears to have spent almost his entire life in Brescia where he lived as a sybarite. His studio was a sought-after place for cheerful conversationalists, enlivened by the music of the zither of which he was an accomplished player. Bocchi was a pupil of Angelo Everardi (1647–1678), nicknamed il Fiammenghino for his knowledge of Flemish painting. Like his master, Bocchi became a painter of battles and bambocciate, generally seen as humorous or satirical, and often scabrous pieces. Some resemble the decorative conceits of Giuseppe Arcimboldo (1526/7–1593); others suggest the nightmarish world of Hieronymus Bosch (c. 1450–1516). Many of Bocchi’s works in this peculiar idiom depict the battles, cavalry skirmishes, fights, games, dances, feasts, festivals and triumphs of hordes of dwarfs, hunchbacks, midgets, pygmies and animals. Bocchi’s bambocciate predate Jonathan Swift’s Gulliver’s Travels, first published in 1726 by which time the artist was already 67;  however, he soon learned about the stories of the Lilliputians, several of which he depicted. 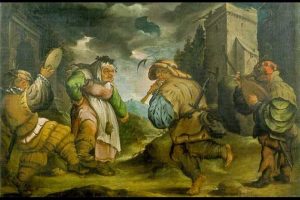 In the centre are a couple dancing a tarantella; on the left a man plays a tambourine; on the right, a man in a bird-like mask and costume plays a lute. The dancing man plays a flared-bell pipe, almost certainly a recorder. Curiously, both dancers wear spectacles! The figures of the tambourine and recorder players are taken directly from the etching Dancing Dwarfs with Flute and Tambourine by Jacques Callot (1617). 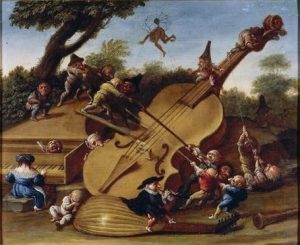 Here, a gang of dwarfs struggle to play an enormous violin, one team near the nut attempting to place what look like beads on the strings, another pulling and pushing the bow. A dwarf sitting on top of the bowl of a lute plays a pipe of some kind, another dozes against the lute’s end. A female dwarf sits at an appropriately sized harpsichord into which a dwarf composer clutching a rolled manuscript seems to have fallen. Hovering above the scene a small dwarf is borne away by a spider. Lying on the ground bottom right, half out of frame, is a renaissance style recorder with only the foot and lower body visible. One of a pendant pair of paintings. 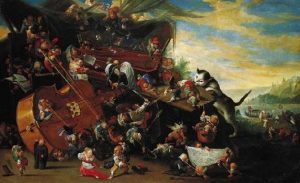 Beside a river, a ship seems to have foundered on top of a hill. A horde of dwarfs tumble down the hillside getting into all sorts of mischief along the way. Some clamber all over an enormous violin and three of them attempt to drag the bow across the strings. One perches on the tailpiece of the violin, blowing a huge recorder, his little hand at the side of the window/labium area. Lower down, beyond his reach extends a line of three finger holes, but two other men (seen from above) hold up the foot end: one trying (presumably) to reach up as far as the bottom holes (not visible), the other helping by blowing air into the open bore end! A huge grey and white cat is about to pounce on two dwarfs in the process of attacking others below. The would-be musicians seen here reappear in The Orchestra, Musée des Beaux Artes, Rouen, Inv. G 54-6 (see below). 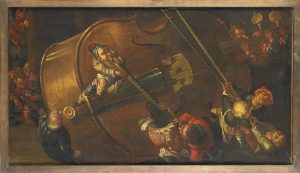 Tiny men clamber all over an enormous violin. Three of them attempt to drag the bow across the strings. One perches on the tailpiece of the cello, blowing a huge recorder, his little hand at the side of the window/labium area. Lower down, beyond his reach extends a line of nine finger holes, but two other men (seen from above) hold up the foot end: one trying (presumably) to reach up as far as the bottom holes (not visible), the other helping by blowing air into the open bore end! The would-be musicians seen here can also be found in Bocchi’s Parody Concert (see above). 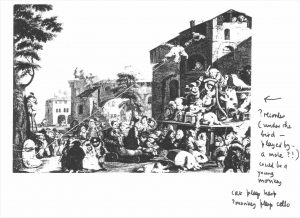 Dwarfs gather around a makeshift stage on which musicians (including animals), conducted by one of their number waving a roll of paper.  A child and two birds sing; a monkey plays a cello, a child a lute, a cat a harp, and a mole a pipe (possibly a recorder). Above them, children play on a flying fox attached at one end to the tall building behind the stage and at the other to the base of a nearby tree against which leans a man on stilts. Pandemonium reigns throughout. Said to be one of a pendant pair.

Whilst three dwarfs warm themselves around a fire, three more carry an enormous recorder blown by a fourth dwarf towards towards two others who sing from broadsheets. The recorder is of renaissance style but with a prominent beak which is oriented upside down to the body of the instrument! 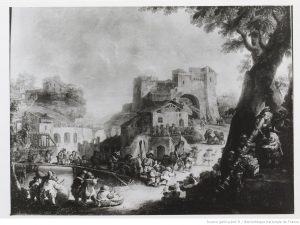 All is hustle and bustle in a village inhabited entirely by dwarfs, hunchbacks, and pygmies. Instead of a giant, a group of these little men have captured a perfectly depicted three-piece baroque recorder which they are carrying down a steep hillside on the edge of town. In the bottom left corner, a band plays shawms and drums. 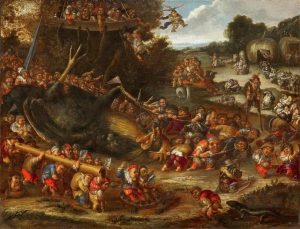 An army of dwarfs are towing an upended rooster downhill with ropes. Beside them, more dwarfs carry a perfectly depicted a one-piece renaissance style recorder much bigger than themselves. One dwarf blows the instrument; others sing from sheet music. In front of the recorder, two singing dwarfs ride atop a tortoise; another travels by snail; and two dance as they play a xylophone and a tambourine. Behind the rooster, a veritable horde of dwarfs advance, at least seven in the front line playing recorders! On a rickety platform, high in the trees, onlookers jostle for a view of the procession, some falling from their perches. One of the latter has been caught by a passing dragonfly. Beside a river at the foot of the slope more onlookers sit on the cap of a scarlet mushroom, one playing a fiddle, another a cello. A dwarf walks beside the river on stilts. On the other side of the river more dwarfs crowd forward from their pumpkin homes. In the bottom left-hand corner sits a severely maimed dwarf who looks for all the world like Stephen Fry! In the bottom right-hand corner, a lizard enjoys the spectacle. 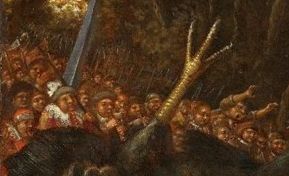 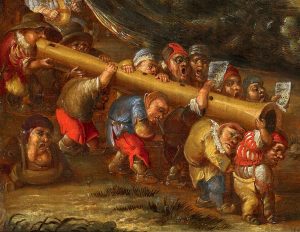 The attentive reader will have noticed that all but one of the recorders depicted in Bocchi’s paintings are one-piece renaissance style instruments of simple external design, but one is a three-piece baroque style instrument with its highly decorative turnings. Bochi lived during the period in which the baroque recorder first emerged in the mid-17th century and reached its final form in the French court at the beginning of the 18th century.

Between the 17th and 18th centuries, Bacchio’s oeuvre enjoyed enormous success, so much so that other painters were committed to imitating and continuing his work, especially the Bergamo Enrico Albricci (1714–1775). In the cultured Enlightenment circles of eighteenth-century Lombardy, the genre became a good-natured and captivating vehicle of moralizing satire. 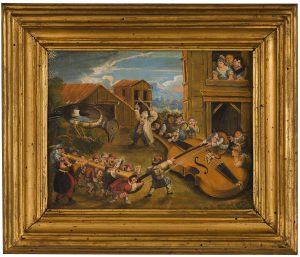 Auctioned with a pendant, Departure of the Groom. A horde of dwarfs crowd into the yard of a country estate to celebrate a wedding. From an upstairs window of the house the matrimonial couple and their family look out at two teams of musicians. Immediately below them three dwarfs operate the bow of an enormous violin as others are fretting the strings. Opposite them, a dozen or so dwarfs are carrying an enormous renaissance-style recorder which one of them is blowing whilst several reach out to cover the finger holes, and others sing from broadsheets. A larger midget in a white coat is waving a stick in the air either to conduct the musicians or to scare away a gigantic bird which looks as if it is about to peck them. Albrici’s debt to Bocchi is patently obvious, here.