A brief history of square recorders

Over the past decade or so square-profile bass recorders have become enormously popular. They are most familiar to us in the form of cranked organ pipes, first designed and made by Joachim Paetzold  in 1953. Their design was patented and further developed by Joachim’s nephew Herbert Paetzold in 1975. Their ease of construction, requiring little more than a decent mitre saw, a measuring tape and some clamps, and their use of inexpensive materials lend themselves particularly well to the larger sizes of recorder and render these otherwise very costly instruments more affordable to a wider range of players.  Furthermore, their tone is impressively strong in the lower register and speaks easily over two or more octaves. 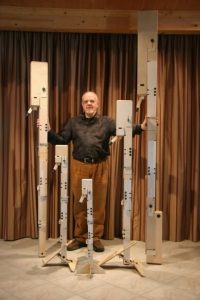 Herbert Paetzold with his extended consort of square-profile recorders

These wonderful instruments are capable of an extraordinary range of timbre, attack and other sound effects and have become the ‘axes’ of choice for recorder players exploring what in my day used to be called musique concrète, these days known as “contemporary music”.

In 2012 the rights and production of the square-profile Paetzold bass recorders were transferred to the workshop of Joachim Kunath, their name changed to “Paetzold by Kunath” and the workshop itself relocated from Ebenhofen to Fulda. They are now made in tenor, bass, greatbass, contrabass, subgreatbass and subcontrabass sizes, each with a full two-octave range, thus providing a rich full 8-foot pitch set for consort, recorder choir, or continuo use. They are available in birch, cherry, mahogany, and RESONA. The latter is a synthetic composite with a similar density to rosewood but made from renewable raw materials. The Paetzold by Kunath range incorporates many innovations, including the option of a direct-blown mouthpiece.

Independently, New Zealand maker Alec Loretto built an experimental square-profile bass recorder in 1967, a photograph of which was published by him in 1970 (Loretto 1970, Madgwick & Loretto 1996), although it lacked keywork of any kind. Dolmetsch also adapted the square-profile approach to their own range of Millennium Series bass recorders which were furnished with conventional woodwind keywork.

A further development of the square bass recorder was the compact design contrabass in F designed by Denis Thomas (2004), reminiscent of the so-called columnar recorders of the sixteenth century. Colin Windsor (2004) provided details of a direct-blow square-profile basset of his own design and construction.

Alec Loretto published instructions for making DIY square-profile “medieval” soprano and alto recorders in 1996 (Loretto 1996a&b, 1998). But perhaps he was anticipated in this by actual medieval forerunners of his craft.

An anonymous 15th-century manuscript (F Lm 391, f. 28) depicts a man in what looks like a bowler hat playing a duct flute which is decidedly square in cross-section. 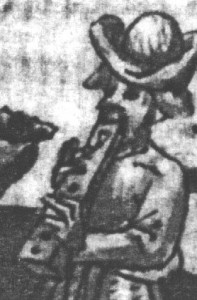 A second 15th-century depiction of a square-profile recorder can be found in a copy of Christine de Pisan’s L’Epître d’Othéa (ca 1406), namely Midas Judging the Contest Between Pan and Apollo, an illumination by the Master of the Epistle of Othéa (F 606, f. 14r.) 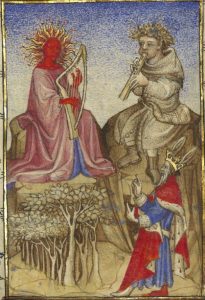 A third medieval square-profile recorder is clutched in the hands of a grinning monkey sitting on a drum in an anonymous late 15th-century stone relief in the cloister of the Monastery of San Juan de los Reyes, Toledo. A notable feature of this version is the placement of finger holes for each hand on adjacent faces of the body of the instrument. 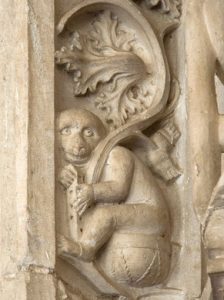 Note that the artists in all three of these 15th-century depictions seem perfectly capable of depicting curved surfaces and edges where they wished to.