Instruments that have been interpreted as recorders are depicted in many illustrations and carvings from the eleventh century onwards. However, these are generally considered to be unreliable and it is far from clear whether flageolets (six-holed pipes), recorders, shawms, or even bagpipes were intended. The situation has been aggravated by Brown and Lascalle (1972: 79) whose influential manual for cataloguing musical subjects in Western art listed all duct flutes as recorders, regardless of the number of finger holes thus giving rise to much confusion, not the least of it in Brown’s own articles (see below). Accounts and reproductions of some of these various depictions of recorders and recorder-like instruments have been given by Sachs (1942), Thomson (1968), Munrow (1976), Hunt (2002), Bowles (1977, 1983), Godwin (1977), Brown (1984, 1995), Zaniol (1984), Salmen and Besseler (1969, 1976), Thomson & Rowland-Jones (1995), Boragno (1998), in the many publications by Rowland-Jones (see Bibliography) and most comprehensively in the online catalogue of some 4,300 artworks featuring the recorder or recorder-like instruments on the Iconography page on this web-site, which includes links to many reproductions.

On inspection, the ambiguous illustrations of wind instruments fall into two camps namely:

Medieval and early renaissance illustrations of duct flutes which are unequivocally recorders are those in which tone holes for seven fingers are clearly shown. Often the lowest tone hole is paired, with one hole plugged with wax. Of these early recorders, several external forms are generally depicted:

Internal bore profiles of recorders are shown diagrammatically by Loretto (1995)  who has quite rightly cautioned against the practice of extrapolating the bore of a recorder from an illustration of its external profile and, to some extent, the context in which it is depicted. Thus, it should be noted that any attempt to do so (here or elsewhere) is a matter for informed speculation.

Perhaps the earliest illustration of a recorder as such is The Mocking of Jesus (after 1315), a fresco from the Church of St George, Staro Nagoričane, a village E of near Kumanova in (Yugoslav) Macedonia, painted by the court painters Michael Astrapas and Eutychios, in which a musician plays a cylindrical duct flute, the beak and window/labium of which are clearly visible, as are open holes beneath three lifted fingers of the player’s uppermost (left) hand and four holes for the fingers of the lowermost hand (also off the instrument). This fresco is very different from the stereotyped frescoes found elsewhere in the region, and it is possible that it records a theatrical performance of an earlier time (see Marjanović and Major 1995 and ). Initially, Rowland-Jones (1999) doubted that the artist here “has shown us the first recorder”, arguing that “the length of the instrument between the lower hole to the bell-end … although there is no flare, is characteristic of shawms.” Later, Rowland-Jones (2006: 15) writes: “The instrument may be an early version of the short cylindrical six-holed frula, the most popular of present-day Serbian duct flutes. The position of the player’s right thumb makes it unlikely that the instrument has a thumb hole; there are no paired little-finger holes, and the hole very close to the bell-end is probably for tuning as it is out of reach of the player’s left little finger.” To this writer the instrument in question looks absolutely nothing like a shawm; it is very clearly a duct flute. Indeed,  its cylindrical profile, the existence of a beak, window/labium, and holes for three fingers of the uppermost hand and four for those of the lowermost are entirely consistent with the recorder. Although the thumb of the uppermost hand is held awkwardly at the side of the instrument, it is not being played musically but merely blown to create an excruciating noise. Thus, in my estimation, a recorder remains a real possibility, here. I note that the artists seem to have gone to some trouble to illustrate the recorder and drum accurately: the snare, lapping, lacing  and curved beater of the latter are all clearly delineated.

There is a carved misericord (c. 1330) from Chichester Cathedral which depicts a possible recorder and harp duo (see below). Rowland-Jones (pers. comm. 2009) reports that the Angel Orchestra, carved in the vaulted ceiling above the Great East Window of the Presbytery at Gloucester Cathedral includes one angel who plays a soprano duct flute (flageol or recorder) which has a window/labium. The player’s lower (left) hand is drawn slightly away from the instrument and from the floor one cannot see any finger holes. The vault was completed c. 1360 but was repainted by Clayton and Bell between 1870 and 1895, presumably after some restoration of the stonework. If this is a recorder than it is amongst its very earliest representations.

Rowland-Jones (in Brown 1995: 22, footnote 8 and 1996) has argued convincingly that the centre panel of La Virgen con el Niño [Altarpiece of Our Lady of the Angels], depicting a Virgin and Child surrounded by angels playing musical instruments (ca 1385), painted by Pere (Pedro) Serra for the church of Santa Clara, Tortosa, now in the Museo Nacional d’Art de Catalunya Barcelona, shows what is clearly a cylindrical recorder of alto size. As can be seen from the detail (below), the instrument is held with the wrists well below the instrument, which is not the most natural position for playing the six-holed pipe, and beside the little finger of the lowest hand is an additional hole which appears to be plugged, possibly with wax. Favà Monllau (2011)  has raised the possibility of a later date of ca 1400 for this altarpiece. 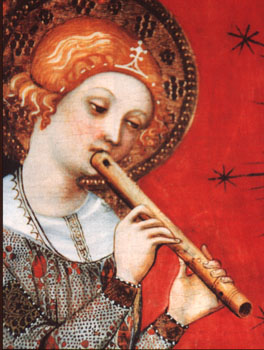 There is a possible recorder-playing angel high up in the Rosary stained-glass windows in the cathedral at Evreux, between Rouen and Paris. Although the windows were restored in 1893, this particular angel seems to have escaped the restorer’s notice. Although the number of finger holes is not clear, this may well be the first French depiction of a recorder. It is cylindrical in outline and it is turned slightly towards the viewer, as if the artist thought it might be an unfamiliar instrument. The glass seems to have been installed between 1387 and 1400 (Rowland-Jones 2006).

In a wood-carved nativity scene (ca 1430) from Exeter Cathedral one of the shepherds holds a large cylindrical duct flute which surely must be a recorder, given the offset position of the lowest finger hole (see below). The Nine Muses, and Francvouloir and Malebouche [Freethinker and Evil Tongue], miniatures from Martin le Franc (1410-1461) Le Champion des Dames (1440-1442 & 1451) depict cylindrical recorders which appear to be consistent with the Dordrecht instrument (see below). Sebastian Virdung served as chaplain and singer in Heidelberg and other cities, including Basel. His Musica getutscht und Ausgezogen (1511), published in both Basel and Strasburg (Virdung 1511), shows a quartet of recorders of which there are three sizes. These instruments, with their clearly delimited beak and beaded foot-piece, are strongly suggestive of the Dordrecht-style recorder. Nonetheless, it is probable that they had a wide, cylindrical or near-cylindrical interrnal bore, but without the choke characteristic of the later conically bored Renaissance recorder.

A very similar quartet to that of Virdung is illustrated by Martin Agricola in his Musica Instrumentalis Deudsch, published in Wittenberg in 1529 and again in 1545. Agricola was the Cantor of the Protestant Latin school in Magdeburg. Consorts of cylindrical recorders, possibly of the wide-bore style consistent with the recorders depicted by Agricola and Virdung may date from as early as Bernat Martorell’s Coronación de la Virgen (1427-1452). Indeed, such trios seem to have represented something of a genre in their own right, examples including: Miquel Nadal’s Retablo de los Santos Cosme y Damián con la Virgen (1453-1455), The Master of the Lyversberger Passion’s Coronation of the Virgin (ca 1463), the Vallmoll Altarpiece by Jaume Huguet (1414-1492), Gangolf Herlinger’s Coronation of the Virgin (ca 1520), and Le Triomphe des vertus sur les vices from the Tapestry of Dance or The Seven Deadly Sins (1519-1524).

The brief Introductio gescriben uf pfifen, the first known treatise on the recorder is a manuscript booklet, now in the Universitätsbibliothek in Basel, probably written out for the 15-year-old Bonifacius Amerbach (c. 1510)  includes a sketch of a ‘Discant’ (soprano) recorder in G, with fingerings (Staehelin 1978, Kmetz 1988, Möhlmeier and Thouvenot 2002: 7-10). An interesting feature of the instrument depicted is the absence of sidewalls to the window/labium. Li Virghi (2011) notes that the absence of the two sidewalls of the window might be expected to give a loud, full sound with a distinctive attack or “chiff”. Such instruments continue to be represented well into the eighteenth century. It is possible that these represent choke-bore recorders with a limited range of an octave and a minor seventh rather than Ganassi-style instruments with a more extended range.

Rowland-Jones (1994, 1995) has argued that the consort of four recorders depicted on the title-page of the first book devoted entirely to recorder-playing, namely Opera intitulata Fontegara (Sylvestro Ganassi 1535), published in Venice, are of the Virdung/Agricola wide-bore kind. However, the soprano instrument treated in Ganassi’s text had a range of two octaves and a sixth which would clearly have been beyond that possible on recorders of either wide-bore or choke-bore designs. The highly developed technique described by Ganassi and later by Girolamo Cardano (c. 1546) in his treatise De Musica demands a recorder of a completely different bore as attempts at its reconstruction have shown (see below).

Marvin (1978) presented an illustrated and detailed article on making recorders extrapolated from the Fontegara frontispiece, estimating measurements from other details depicted to produce an instrument that worked well with Ganassi’s fingerings (Loretto 1995). 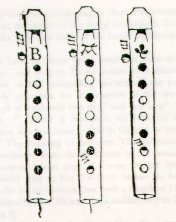 I note that an intarsia panel from S. Nicola e S. Domenico, Bologna, made between 1528 and 1549 by Damiano Zambelli (1480-1549) includes two cylindrical recorders each with the maker’s mark (a trefoil with a left-pointing stem) under the window and on the foot. These trefoil maker’s marks are very similar (though inverted) to the third of those illustrated by Ganassi, and now thought to represent Hans Rauch von Schrattenbach. In St Joseph and a Shepherd (1519), a painting by Paolo Zacchia (op. 1519 – ca 1561) in the Pinacoteca di Brera, Milan, a recorder held by the shepherd also bears a clearly depicted single trefoil. A tenor recorder in the Moeck collection (Celle) bears a mark with a single trefoil, as do bassets in Paris and Vienna. I note that Silvestro Ganassi belonged to a large family of musicians and instrument makers, probably originally from Bologna. Lyndon-Jones (1998) has presented evidence that the alto recorder from Catajo, now in the Vienna collection (SAM 135), widely used as the model for so-called ‘Ganassi’ recorders, was actually part of a consort. In the Vienna collection is a case (SAM 171) bearing the same variation of the maker’s mark as SAM 135, and the recorder fits into it perfectly. The case was made to hold four recorders: a soprano, two altos, and a tenor.. The same variation of the mark is found on three tenor recorders in the Vienna collection (SAM 146, 149 and 150), so they must have originally been part of at least two sets. Thus, this instrument seems never to have been the evolutionary “missing link” between renaissance and baroque recorders as had been previously thought (Brown 2005, 2006). Indeed, Marvin (2007) has suggested that the large finger holes and reamed-out foot of SAM 135 were perhaps the results of a major effort to raise its pitch to match that of its higher-pitched brethren. It now seems clear that the so-called “Ganassi” recorder as we know it was actually ‘invented in the 1970s following ground-breaking research by several makers.  In the event, the design adopted by the late Fred Morgan (Australia) became the most prominent both through recordings and concerts by celebrated players, and his distribution of the drawing he made in Vienna.